A Mechanical Analog of the Two-Bounce Resonance of Solitary Waves: Modeling and Experiment

We describe a simple mechanical system, a ball rolling along a specially-designed landscape, that mimics the dynamics of a well known phenomenon, the two-bounce resonance of solitary wave collisions, that has been seen in countless numerical simulations but never in the laboratory. We provide a brief history of the solitary wave problem, stressing the fundamental role collective-coordinate models played in understanding this phenomenon. We derive the equations governing the motion of a point particle confined to such a surface and then design a surface on which to roll the ball, such that its motion will evolve under the same equations that approximately govern solitary wave collisions. We report on physical experiments, carried out in an undergraduate applied mathematics course, that seem to verify one aspect of chaotic scattering, the so-called two-bounce resonance. 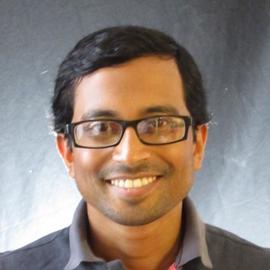 Amin did his undergrad and Ph.D. at NJIT. After he took the capstone class with me, he and two other students worked to turn that project into a research paper.